The Hadoop Ecosystem is a framework and suite of tools that tackle the many challenges in dealing with big data. Although Hadoop has been on the decline for some time, there are organizations like LinkedIn where it has become a core technology.  Some of the popular tools that help scale and improve functionality are Pig, Hive, Oozie, and Spark. Spark has developed legs of its own and has become an ecosystem unto itself, where add-ons like Spark MLlib turn it into a machine learning platform that supports Hadoop, Kubernetes, and Apache Mesos.

Most of the tools in the Hadoop Ecosystem revolve around the four core technologies, which are YARN, HDFS, MapReduce, and Hadoop Common. All these components or tools work together to provide services such as absorption, storage, analysis, maintenance of big data, and much more.

Here is a list of the key components in Hadoop: 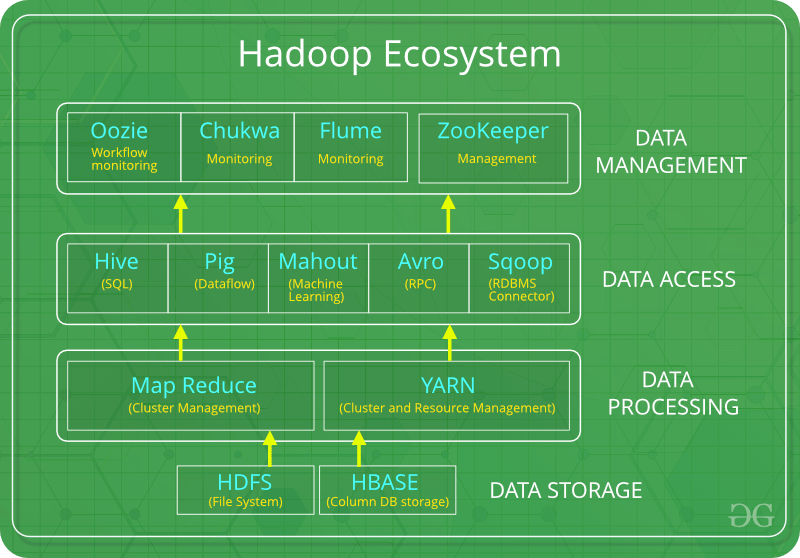 Below, we highlight the various features of Hadoop.

Hadoop MapReduce is a software programming model used for writing applications. These applications can process multi-terabyte data-sets in-parallel on large clusters of commodity hardware in an Apache Hadoop cluster in a fault-tolerant manner.

MapReduce improves the reliability and speed of this parallel processing and massive scalability of unstructured data stored on thousands of commodity servers.

Two main functions of MapReduce are:

The HDFS architecture (Hadoop Distributed File System) and the MapReduce framework run on the same set of nodes because both storage and compute nodes are the same.

Due to this configuration, the framework can effectively schedule tasks on nodes that contain data, leading to support high aggregate bandwidth rates across the cluster.

Top benefits of MapReduce are:

YARN (Yet Another Resource Negotiator)

Introduced in Hadoop 2.0 to remove the bottleneck on Job Tracker, YARN has now evolved to be a large-scale distributed operating system for Big Data processing. In Hadoop 1.0, the Job tracker’s functionalities are divided between the application manager and resource manager. However, the YARN architecture separates the processing layer from the resource management layer. There is a global ResourceManager (RM) and per-application ApplicationMaster (AM). The ResourceManager consists of two main components: ApplicationsManager and Scheduler. The per-application ApplicationMaster handles the negotiation of resources from the ResourceManager. It also works with the NodeManager(s) to monitor and execute the tasks.

The Scheduler allocates resources to running applications with familiar constraints of queues, capacities, and other features. The Scheduler considers the resource requirements of the applications for scheduling, based on the abstract notion of a resource container that incorporates memory, disk, CPU, network, etc. 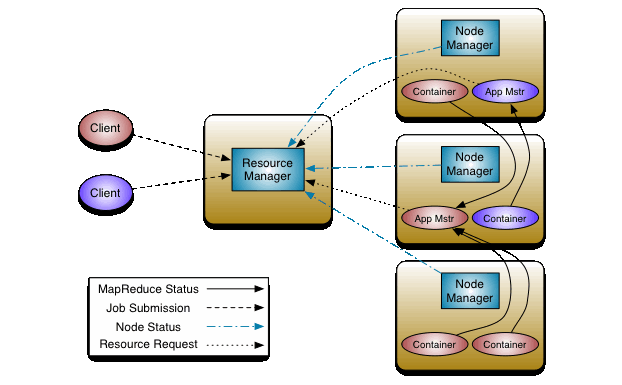 Key benefits of YARN are:

Hive provides SQL developers with a simple way to write Hive Query Language (HQL) statements that can be applied to a large amount of unstructured data. The objective of Hive is to make MapReduce programming easier as you don’t have to write lengthy Java code. You write queries simply in HQL, and it automatically translates SQL-like queries into batch MapReduce jobs. You can easily integrate with traditional database technologies using the JDBC/ODBC interface.

Key benefits of Hive are:

Apache Pig was developed by Yahoo and it enables programmers to work with Hadoop datasets using an SQL-like syntax. Presently, the infrastructure layer has a compiler that produces sequences of Map-Reduce programs using large-scale parallel implementations. 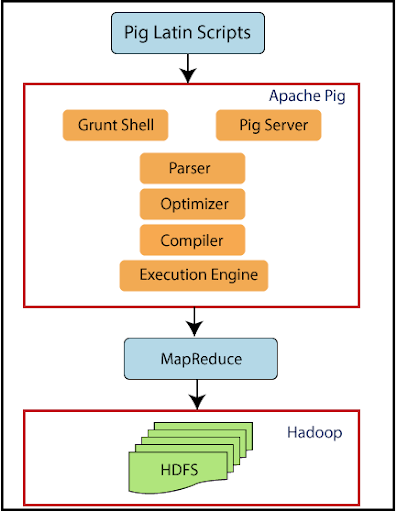 Parser handles the Pig Latin script when it is sent to Hadoop Pig. This component checks the syntax of the script and other miscellaneous checks. Parser’s output is in the form of DAG (Directed Acyclic Graph), and it contains Pig Latin statements and other logical operators.

These jobs are then passed to Hadoop in a sorted order where these are executed to get the desired result.

Top features of Pig are:

Originally developed at UC Berkeley, Apache Spark is an ultra-fast unified analytics engine for machine learning and big data. Internet giants such as Yahoo, Netflix, and eBay have deployed Spark at a large scale, to process petabytes of data on clusters of more than 8,000 nodes.

Spark is primarily used for in-memory processing of batch data. It also supports stream processing by combining data streams into smaller batches and running them. The component is generally used for machine learning because these algorithms are iterative and Spark is designed for the same. 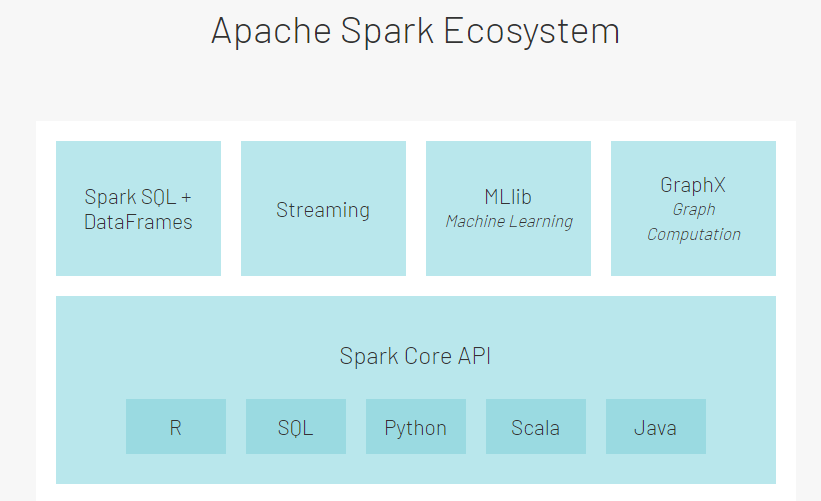 Top features of Apache Spark are:

Apache Oozie is a Java-based open-source project that simplifies the process of workflows creation and coordination. It is fully integrated with the Apache Hadoop stack. Also, it supports Hadoop jobs for Apache MapReduce, Hive, Sqoop, and Pig.

An Oozie workflow is a collection of actions arranged in a DAG that can contain two different types of nodes: action nodes and control nodes. Control nodes define job chronology, provide the rules for a workflow, and control the workflow execution path with a fork and join nodes. On the other hand, action nodes trigger task execution. Action nodes can be MapReduce jobs, file system tasks, Pig applications, or Java applications. Oozie uses the XML-based language, Hadoop Process Definition Language, to define the workflow. This command-line program with Oozie uses REST to interact with Oozie servers. To run a job using the Oozie client, users give Oozie the full path to your workflow.xml file in HDFS as a client parameter. It uses an RDBMS for storing state.

Top features of Oozie are:

This is an open-source Apache project that provides configuration information, synchronization, and group services and naming over large clusters in a distributed system. Zookeeper makes distributed systems easier to manage with more reliable changes propagation.

For applications, the project maintains status-type information called znode in the memory of Zookeeper servers. Then, it provides an infrastructure that allows cross-node synchronization. 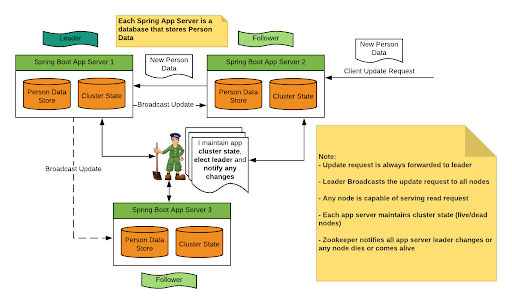 Top features of Zookeeper are:

Apache Mahout is a powerful open-source machine-learning library that runs on Hadoop MapReduce. More specifically, Mahout is a mathematically expressive scala DSL and linear algebra framework that allows data scientists to quickly implement their own algorithms.

The three main components of Mahout are the recommendation engine, clustering, and classification.

The recommendation engine supports the classification of item-based or user-based models. Facebook and Amazon use it to suggest products by mining user behavior. Finally, classification determines whether a thing should be a part of some predetermined type or not. Facebook’s spam checker and face detection use this technique.

Key features of Mahout are:

LinkedIn developed Kube2Hadoop that integrates the authentication method of Kubernetes with the Hadoop delegation tokens. It does this while respecting the fine-grained role-based access control (RBAC). RBAC controls user access to its extensive Hadoop resources.

Three main components of Kube2Hadoop are:

Kube2Hadoop lets users working in a Kubernetes environment to access data from HDFS without compromising security. Key features of Kube2Hadoop are:

The Hadoop Ecosystem is a powerful and highly scalable platform used by many large organizations. LinkedIn, Google, Facebook, MapR, Yahoo, and many others have contributed to improving its capabilities. While it might not be winning against the cloud-based offerings, it still has its place in the industry, in that it is able to solve specific problems depending on the use case.